Hey everyone!
Today I am reviewing Miss Claire Eye Pencils called the Glimmersticks in the shades ‘denim blue’ and ‘tahitian blue’.
These come for I think somewhere around 150 INR/- each and in various shades. I have three more of these in Black, White and a grey one called Graphite which have been reviewed already.

Packaging:
It comes with a silver lid and the rest of the pencil is in the color of the liner. It has to be sharpened. 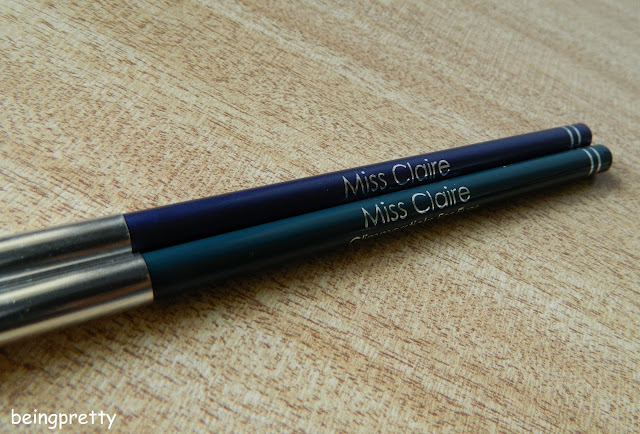 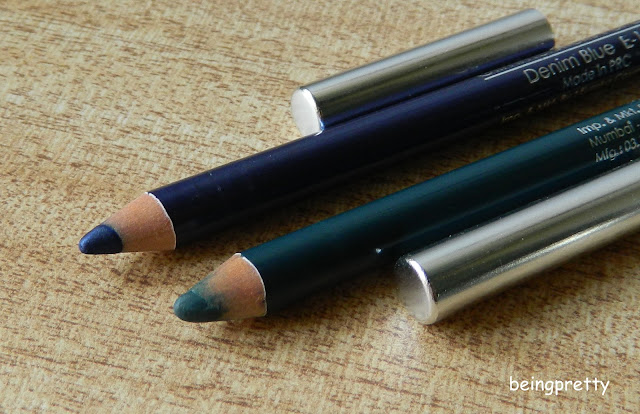 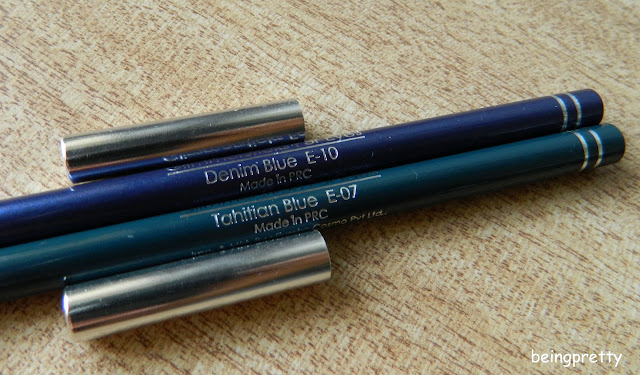 My take on the product:
Since I already had tried some liners from this brand and I wanted to get some fun colored eye liners I got these two! And I’d had them for some months now.
Now on to the two shades..Denim Blue is a pretty blue shade with shimmer and looks my warm brown eyes pop! Whereas Tahitian Blue is not blue at all, it is dark green in fact and matt with no shimmer at all! They are creamy in texture and pigmented but now the problem arises..it doesn’t stay long!! It fades that too unevenly. Yeah..I have tried them at home first so that I know how long they stay but I noticed they stay on one eye and fades on another! This is not what we want our liners to do right??!!  And they smudge as well. And they don’t come with testers as well..so you can’t swatche them..
I haven’t dared to use these to college after that! But I tried some eyeshadow swatches on with these as base and it works that way! So I can use them when I do looks atleast!
But I still love the other grey one from Miss Claire called ‘Graphite’!

Will I buy these again?: No!! I am looking forward to get my hands on some Faces liners instead.

Posted by beingpretty at 7:59 AM

I love seeing comments and replying to them!! Feel free to comment!!

beingpretty
mumbai, maharashtra, India
Hiya!! I am student from India..writing about "being pretty" inside,outside..and in all ways possible...Here you'll find nail art, eye looks, hauls, beauty tips, reviews and more... Thanks for stopping by... :)